With both Sun and Moon spotlighting signs which are versatile and changeable, it means we can more easily move with the times and get into our own flow, especially when we fulfill an innate human need to serve and help – oneself, as well as others on both a practical and spiritual level: by sifting out the dross, saving the best, and purifying the rest.

Over this mutable and imaginative Full Pisces Moon, opposite the sensible Virgo Sun, we work to illuminate the mundane, discern fake from real, health from harm, and organise our dreams in a practical manner to analyse the truth of illusion AND still make time to tidy a bedroom strewn with memories, poetry and song, bills and invoices.

Be aware how those who don’t believe in magic also never get to experience any real enchantment. Yet for those who understand how wonder begins with universal interconnection, be prepared for miracles and divine intervention. Even prayers could suddenly be answered within the magical confines of a ‘Mystic Rectangle’ created by the planets, just as Luna culminates.

Events over this chimerical Full Moon also have the potential to awaken sudden Eureka moments that elevate the ordinary to the divine – more so when we fill life with meaningful activity. Yet to implement the healing Virgoan simplicity of a Zen forest monk is no small feat: chopping wood, fetching water, and straightening the closet as a means to self-realisation. Such renunciation requires a deep-seated faith and stability of mind, practical resolution and a heart in tune with the wise feminine sacredness found within us all (yes, guys also have a feminine side) and in our environment. For those in the busy material world of ‘doing’ and not simply ‘being’, to bring every breath back to the holy spaciousness of a Piscean meditation, might feel as though work is now seriously cut-out. It is. But so worthwhile. And perhaps more easily digested when seen as a karmic investment for any budding baby Bodhisattva to activate a internal personal power – enlightening emotional intelligence – that will carry you through the next few weeks (months) of an impatient, and often thwarted in its tracks, Mars retrograde. Check 28 degrees Aries in your chart and see where Mars is going to station and join eight (!) heavenly bodies already retrograde September 9-13th to make nine planets/asteroids retrograde. Patience is called for hereon in, until November 14th/15th  at least; Mars retrograde is in hard aspect to the triple conjunction (Jupiter, Pluto, Saturn), and it’s a bit like driving with the hand-break* on (until the start of the new year). Mars goes forward November 14th, during an intense and dark, Mars-ruled Scorpio Moon seeding a New Scorpio Moon that generally portends fixity and determination. But at this point we will also have to take into account our desire for the freedom of movement is mega and strong, Mars is at home in Aries, the sign of the head-butting Ram, after all.

Back to this Full Moon because, like the imagination, emotions run deep and strong with a Full Moon in the sign of the phantasmagorical Fish, which is also in a wide association (almost 10°) with the Pisces ruler, oceanic Neptune. Many could yearn to drop-out completely, finding the zafu a quite comfortable place to be whilst waiting until the coast is clear of aggressive Mars crazies, OCD cleaners and control-freak sentinels, before breaking out of 2020’s restrictive regimes. (With the major shift of social planets, Jupiter and Saturn and the 200-year Great transMutation at the end of the year on the December Solstice: clarity of communal purpose and social reform pick up a pace by Valentine’s day 2021 (with hearts & flowers!)).

To escape, meanwhile, from any current display of idiosyncratic inconsistencies has an attractive pull over this Pisces Full Moon. If only for a few days, this Full Moon presents the perfect moment to retreat into your own cave/bath/spa/river/beach/imagination and rejuvenate spirit and soul under magical moonbeams – clear minds permitting. Internal clouds obscure the metaphorical view. But still, when Spirit Sun accentuates the Virgin Goddess, Virgo, our natural inclination is to roll-up sleeves and wipe away polluting gunk and gak and get stuck into decontaminating negative stains, such as our thoughts and emotions (samskara, kleshas: karmic imprints in our personal (and collective) energy field). Fear, ignorance, hatred, jealousy, desire, anger: all kinds of difficult feelings are purified when we lighten into coordinated service of Virgo’s gumption, polish and kindness, combined with Piscean intuition and compassion. It is also how discover how intuition works and, if we have the right intention, how to grow bodhicitta.

Seriously, this is a Full Moon that can reveal the crystal clarity of illusive appearance. Both ‘Lights’, Sun and Moon, are also now in harmonious aspect to electrical Uranus in Taurus, powering up humanitarian ideals that are practical and helpful, like growing food within local communities, for instance.

Awareness and insight are prized human qualities these Covid days, where division and frustration, chaos and corruption test both, patience and morals. Still, as always with Uranus, the rebels and oddballs, outcasts and misfits add a frisson of edgy and dangerous reaction. Uranus is retrograde until the Uranus-ruled Aquarius Moon mid-January; during this time the agent of change re-charges teams and groups.

Both Pisces and Virgo are dualistic, in as much as there are two fish with a magical cord that joins heaven to Earth; and the Virgin has her two legs crossed. Right or left, black or white, young or old, you – me, male – female: the Virgo Sun illuminating a Pisces Moon understands the necessity of dualism as a conduit for humans to discover the unified field of ‘Oneness’. And this allows for wisdom and compassion,love and kindness to be a part of any response during this particularly challenging time, when so many retrograde planets suggest rethinking the way we are heading, as well as reviewing the previous six-months (!).

Fun fact: Pisces rules the feet, which do all our walking…

☆ And, as the season’s also begin to change, shifting into Autumn in the North and Spring in the South, we edge towards the light equalizing Equinox. We are entering the time of year when solar activity starts to whip up solar winds and flares, all of which have a direct impact the planet and us personally: earthquakes, floods, and hurricanes are all linked to Solar activity (Solar cycle 25 officially started at the Solstice New Moon Solar Eclipse, with added flares during Leo’s roar at home with the Sun). Solar flares are noted when tension within – and without – is extra strong.

☆ Be aware that a New Virgo Moon on the 17th September is the Equinox Stealth Super New Moon, meaning it is the New Moon close to the Earth, and although the Moon will be dark, tides will be high and we will all (depending upon levels of sensitivity) feel the need to heal in one way or another.

☆ Even with the onslaught of new rules and regulations continuing for a few months, the heavens dictate not all personal freedoms will be lost. Keep the faith. Leading us out of this massive-once-in-a-lifetime backward twirl of retrogrades (9th – 13th September) is Jupiter, planet of faith and freedom, optimism and confidence, going forward on the 13th, taking a lot of pressure off the breaks. But it’s not until the end of the month does Saturn go forward, reminding us that taking one’s time, and being ethical and professional, is necessary to accomplish our goals.

Just as generous Jupiter goes forward on the 13th September, it also makes a fabulous Trine aspect to the Virgo Sun: work and health are therefore well-starred, hopefully for everyone.

☆ Before I close this Full Moon report, there’s more to say about ‘aspects between planets’ in a horoscope. That Mystic Rectangle, for instance, with its glorious and two harmonious trines and sextiles between relationship planets Venus in homey Cancer and Mercury in studious Virgo; and Neptune in Pisces and the triple heavy-duty Jupiter, Pluto and Saturn: all of it suggests there are magical ways to deal with the unseen and the fear that can entail, without resorting to violence or drama.

☆ An Earth Trine between Sun, Uranus and Jupiter encourages Spirit to awaken and steadily grow the light.

☆ It’s also worth taking the Lunar Nodal axis into account at this Full Pisces Moon, as the destiny-fulfilling North Node heads into Gemini, currently with Fixed Stars Polaris and Betelgeuse, indicating authoritative, experienced and commanding communication show the way to success. Also, the Jupiter-Ruled Sagittarian South Node is now conjunct the Galactic Centre! High time we broadened the expansive view, especially whilst carefully double-checking where we are coming currently coming from and going to (or check the 25-26-27° Gemini-Sagittarius axis in your own scope (Consultations!)).

Until next time, take good care; remember ‘Speed is Aggression’ and stay safe.
With love & light,
And many thanks to unknown thankga painter of Tibetan Mahasiddha, Tilopa; to the artist of Auspicious Symbols, and also Buddha’s feet.

Focus & Insight Full Moon Partial Lunar Eclipse 27º14’ TaurusNovember 19th ’21 @ 8:57UT “Everyone has gone through something that has changed them in a way that they could never go back to being the person they once were” ~ Leonardo Decaprio […] 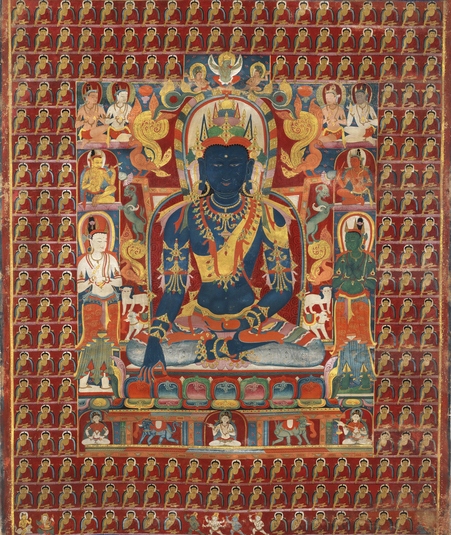